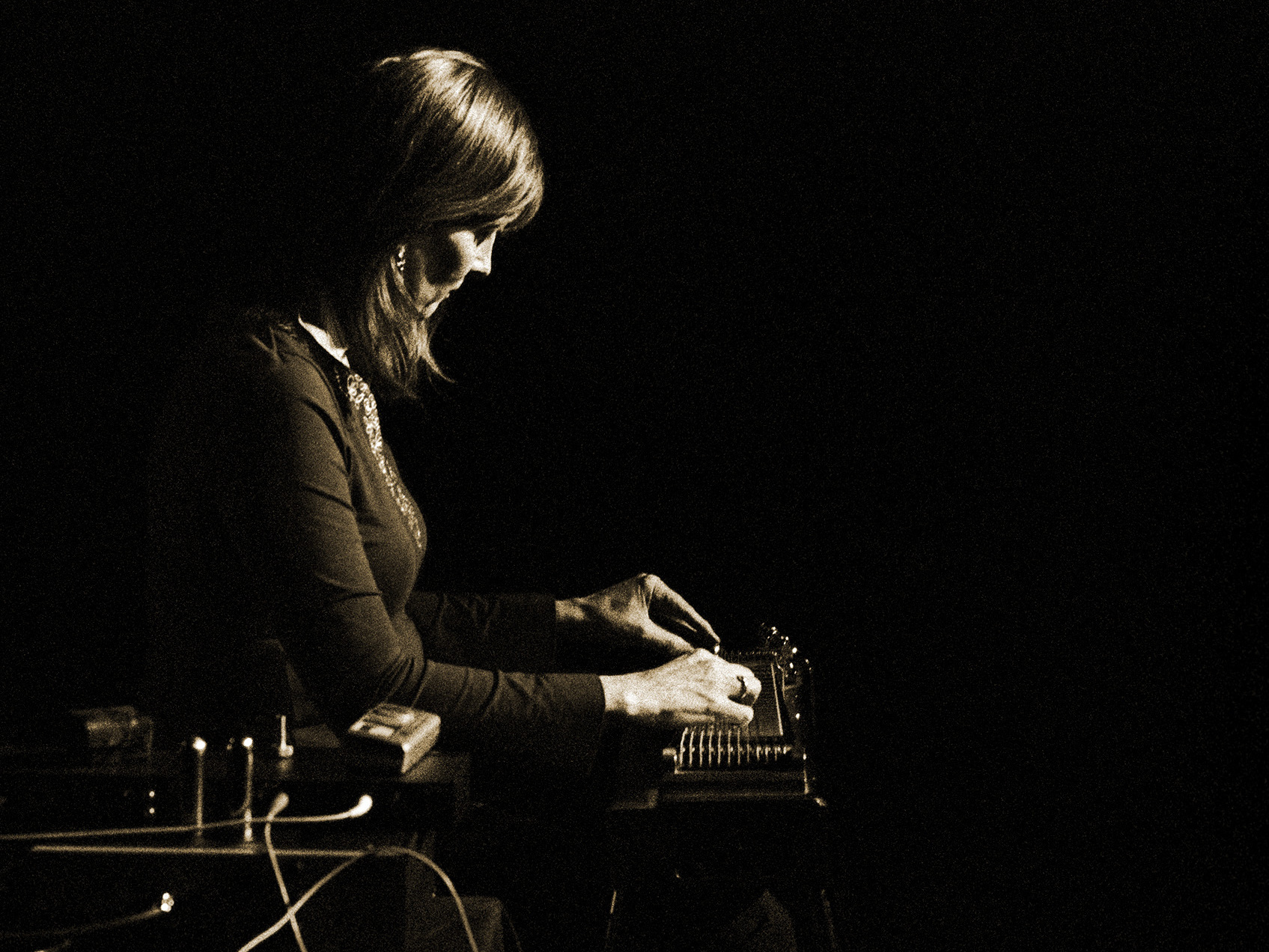 Pedal steel player Susan Alcorn, whose album with her quintet, Pedernal, was the pick for the best album of the year by Francis Davis, who runs the annual NPR Music Jazz Critics Poll. // Courtesy of the artist, David Lobato

If you're old enough, you might recall the comic Godfrey Cambridge from late-night television in the 1960s, when he was one of a new wave of black stand-ups (others included Bill Cosby and Dick Gregory) who, though addressing racial issues in their monologues, came up through jazz clubs and beatnik coffee houses rather than the chitlin circuit, and positioned themselves more kin to George Carlin than integration-ready offspring of Red Foxx and Moms Mabley. But the rotund Cambridge, who "yo-yo" dieted his whole life and suffered a fatal heart attack in 1976, at the age of 43, was also a fine actor. His stage credits included Jean Genet's The Blacks and the original Broadway production of Purlie Victorious, and he starred in the film comedies Watermelon Man and Cotton Comes to Harlem, before Hollywood gave up on him. I remember him cracking up Johnny Carson (or maybe a guest host) by saying he'd been an extra in a few prison movies, always the black guy moaning "Old Man River" or a spiritual. As the camera panned to his cell, he said, he'd wanted to cup his hands around his mouth and yell "EMBEZZLEMENT, NOT RAPE!"

I thought of Cambridge this fall, when I was hospitalized for a month following emergency intestinal surgery the night of Labor Day. "GUT SURGERY, NOT COVID!" I wanted to headline every email I sent to let friends know I'd be laid up for a while. A hospital is a great place to pick up an infection, of course, and for me, it was C difficile. At least my wife got practice being a widow. But remind me to die at home next time.

I'm home now but housebound except for doctor visits, physical therapy and short walks — all the time in the world to catch up on the new albums scattered throughout my apartment, right? But I've been too melancholy and disengaged to focus on anything I once turned to for pleasure. Gradually, after shooing my self-pity, it dawned on me that I'd moped the same way all spring and summer, beginning around St. Patrick's Day. And it wasn't only me.

"I miss LIVE music," a voter in this year's Jazz Critics Poll prefaced his choices for the year's best albums. Wrote another, expressing my sentiments more exactly, "I miss my life." So I wasn't the only one. In 2020 and thus far into 2021, setting foot outside your door was taking your chances, and with a good number of the restaurants, used book and record stores, movie theaters and concert halls that allow me my toehold on the public square closed and unlikely ever to reopen (some already boarded up in fear of being looted, especially after the torture and slow killing of George Floyd), there was nowhere to go, anyway. Midnight or noon didn't matter. The hour was always half-past apocalypse. "It's After the End of the World," Sun Ra titled a piece for his Arkestra in 1970, and more than ever, he seemed prophetic. He called another of his pieces "We Are in the Future," and given this year's presidentially sanctioned insurrections, I worry that this was another Ra prophecy that this "new normal," as people were blithely calling it on television ("new abnormal," was more like it), was what we could look forward to from now on.

The year just ended was an annus horribilis if there ever was one. Nearly every album sent to me for review came with a press release claiming that this was the music we needed in these troubled times. Music can be a healing force, but it can be asked to do only so much. I considered suspending this poll for a year or going ahead with it while abstaining from participating myself (mathematics minus one), until my poll co-conspirator Tom Hull gently nudged me into just getting it over with. I had no idea how many journalists, broadcasters, bloggers, podcasters and sundry and assorted et ceteras would be confident they'd heard enough to vote in this, the 8th Annual, and First Post-Apocalyptic, NPR Jazz Critics Poll. I needn't have worried — there were 148 respondents, the poll's largest turnout to date, going back to its inception in the Village Voice in 2006.

Maria Schneider's Data Lords, a two-disk meditation on the displacement of the natural world concurrent with the specter of virtual reality, won Best Album easily, nearly doubling the points for Ambrose Akinmusire's somber, politically charged On the Tender Spot of Every Calloused Moment. Immanuel Wilkins's Omega ran away with Debut, and in vocal, Sara Serpa's Recognition won a squeaker over Artlessly Falling by Mary Halvorson's Code Girl, not a proper "vocal" album so much as one featuring vocals (by Amirtha Kidambi and former Soft Machiner Robert Wyatt, no less). Palo Alto, a 1968 Thelonious Monk concert was 2020's prize Rara Avis (a catch-all term for reissues and vintage, never-before issued items), and Arturo O'Farrill's Four Questions won in Latin (though both categories may have ended differently had the spectacular Rollins in Holland, from 1967, just before Sonny R. began his second recording sabbatical, not been released after voting was already underway, and if more voters had judged Aruán Ortiz's Inside Rhythmic Falls to be a "Latin" album as well as pedigreed jazz).

Whether in reaction to the pandemic or not, voters this year sought comfort in reliables: Schneider won twice previously, in 2007 and '15; Akinmusire finished runner-up once before, in 2011; and Halvorson, Charles Lloyd, Matthew Shipp and Rudresh Mahanthappa are all Top 10 repeaters. The only newcomers to the Top 10 are Eric Revis, Carla Bley, Ron Miles and Jeff Parker, none a "newcomer" in any other sense (certainly not Bley, whose Escalator Over the Hill might have finished at or on the top in 1971, had this poll existed prior to 2006.)

Here are my personal choices for 2020's best jazz releases. (You can read each of the 148 voters' ballots here.) Bear in mind, though, that I still haven't made much of a dent in those stacks of CDs, much less all those infernal downloads on my hard drive.

1) Susan Alcorn Quintet, Pedernal (Relative Pitch).
It took a lot for me to knock Schneider off the top of my list, but this did it. If you didn't already know that Alcorn plays pedal steel from from her work with Mary Halvorson you might never guess what instrument you were hearing. Essentially an oddly configured string quartet-plus — Alcorn and Halvorson, guitar; Mark Feldman, violin; Michael Formanek, bass; and Ryan Sawyer, drums — this is as far away from Nashville as you can go without leaving Earth's orbit. The jauntiest cut is one that sounds like a tune Ornette Coleman might have written for bagpipe – only without the bagpipe.

2) Maria Schneider Orchestra, Data Lords (ArtistShare).
The anger beneath the surface on Disc 1 ("The Digital World"), new to Schneider's palette, blends more harmoniously with her characteristic midwestern-longing than anyone who can't hear the difference between beautiful and merely pretty might suppose. The soloists — including, Donny McCaslin, Ben Monder, Rich Perry, Steve Wilson Marshall Gilkes and the late Frank Kimbrough — all of whom have been with her seemingly forever, give her their hearts even when simply (or not so simply) reading parts. Drummer Johnathan Blake deserves special mention for the urgency and variegated shadings he supplies beneath it all. If Concert in the Garden (2004), Sky Blue (2007) and The Thompson Fields (2015) haven't already, this breathtaker establishes Schneider as our greatest living jazz composer and orchestrator, if also the least prolific.

3) Matthew Shipp Trio, The Unidentifiable (ESP-Disk).
Shipp, an advocate of what he identified as "the black mystery school piano" in a recent online article, proves himself no less an exemplar of it than Monk, Cecil Taylor or Mal Waldron. He turned 60 in 2020, and what with imports, solo albums and stand-offs with Ivo Perelman and other saxophonists, keeping up with him has been a challenge. The one you can least afford to miss is this dark, churning, deep-in-the-keys — and, yes, mysterious — trio effort with his regular rhythm team (Michael Bisio, bass and Newman Taylor Baker, drums) on the granddaddy of all independent avant-garde labels.

4) The Warriors of the Wonderful Sound, Soundpath (Composed by Muhal Richard Abrams). (Clean Feed/Ars Nova Workshop).
The 17-piece, Philadelphia-based Warriors celebrate what was most likely the irreplaceable Abrams's last work with a parade of explosive soloists, including head Warrior Bobby Zankel (who commissioned it) and such visiting New York horns as Marty Ehrlich (who conducts), Steve Swell, Graham Haynes and Hafez Modirzadeh. But this is music that percolates from the bottom, so reserve praise for bassist Formanek (ubiquitous these days, and you can hear why) drummer Chad Taylor and Tom Lawton, an unheralded Philly pianist who's on fire in the challenging role of Abrams's surrogate.

5) Joshua Redman-Brad Mehldau-Christian McBride-Brian Blade, Round Again (Nonesuch).
A reunion of the most stellar young band of the early 1990s, all of them not just older now but more judicious and more in command of their ebullient virtuosity.

7) Rudresh Mahanthappa, Hero Trio (Whirlwind).
The altoist reinterprets his heroes, ranging from Ornette Coleman to Johnny Cash. I single out Ornette and Cash because Mahanthappa's take on the former's "Sadness" is perfection and his inspired overhaul of the latter's "Ring of Fire" contagious, genre-leaping fun.

9) Liberty Ellman, Last Desert (Pi).
The guitarist's wide-open, perpetual-motion writing for a sextet featuring both bass and tuba shows how much he's absorbed from his stay with Henry Threadgill. The front horns are alto saxophonist Steve Lehman and trumpeter Jonathan Finlayson, both terrific here.

10) Lucian Ban-John Surman-Mat Maneri, Transylvanian Folk Songs (Sunnyside).
Specifically, the folk songs collected by Béla Bartók in the Carpathians in the early 20th century. Bartok couldn't stop himself from adding layers of counterpoint, and Ban, a Transylvanian living in New York who's developed a fine rapport with violist Maneri, can't stop himself from adding still more. Plus, this is your opportunity to catch up with Surman, a Brit who was only the most outstanding baritone saxophonist to emerge between Pepper Adams in the 1950s and Hamiet Bluiett 20 years later, though few stateside have acknowledged as much.

The remainder of my ballot:

Loudon Wainwright III with Vince Giordano & the Nighthawks, I'd Rather Lead a Band (Search Party).

The gospel trailblazer and his powerhouse choir close out Tiny Desk's Black History Month celebration with a moving performance from his studio in Arlington, Texas.

The poet, rapper and singer-songwriter joins us from Zambia for a visually stunning quarantine concert, part of Tiny Desk's Black History Month celebration.