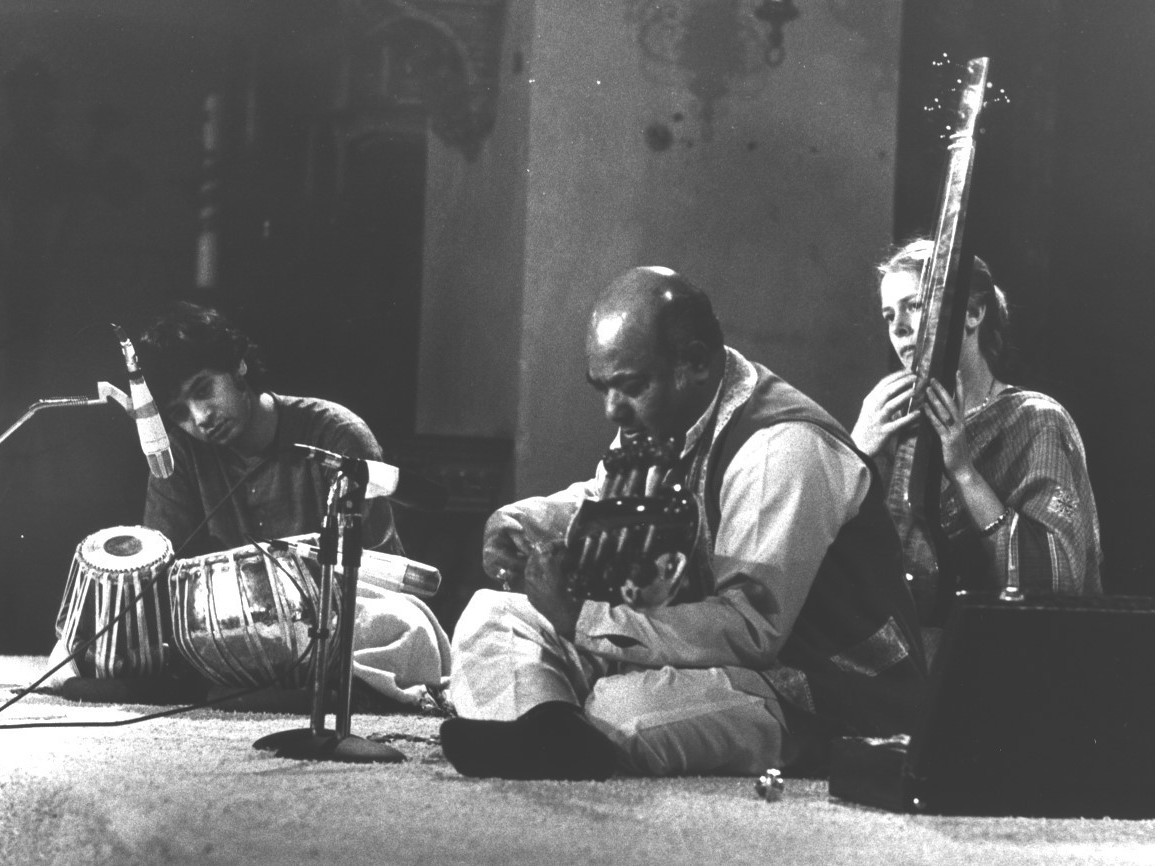 
In May of 1970, at a San Francisco concert venue best known for reverberating with the sounds of the Grateful Dead and Jefferson Airplane, three masters of Indian classical music took the stage for a celebration of Indian ragas. The concert was recorded by another legend of the time: Owsley Stanley, the man who designed the Dead's innovative sound system, as well as making what was reputed to be the best LSD of its day. That recording is now available as a live album, titled Bear's Sonic Journals: That Which Colors the Mind.

On that night, Indian sarod master Ali Akbar Khan was joined on stage by sitar player Indranil Bhattacharya and a 19-year-old percussionist named Zakir Hussain. Hussain had just arrived in America a few months before, occupied with finding his way around the country and understanding the slang: "Words like 'far-out' and 'groovy' and all weren't quite registering," he says.

The language of the hippie generation may not have clicked for Hussain, but sitar maestro Ravi Shankar had already electrified the Woodstock and Monterey Pop festivals. The audience in San Francisco that night was primed to listen.

"In India, I was used to playing with the audience chiming in," Hussain recalls. "Everybody saying 'Wow' and ... 'Do that again,' and all that stuff. But here the audience was quiet, eyes closed, meditative. The room was dark so you couldn't really make eye contact with the audience, and so you were left to rely on your interaction with your fellow musicians."

Since his first American concert, Zakir Hussain has become perhaps the most famous tabla player in the world. He now lives in California, and he says it was this performance 50 years ago that showed him that Indian classical music could be played in the West in its purest form. "It really set the tone of how I would present myself to my fellow musicians — whoever I was accompanying — for the rest of my life."

Capturing the performance in the highest fidelity possible was the goal of Owsley Stanley, the man known to friends as "The Bear." Hussain says Stanley was often seen running around "like a madman," tripping over wires and cursing. "This was a guy who knew what needed to be done about how this music should be presented to those who were not there. I mean, Bear had this idea that the music should be heard in a way where people can close their eyes and actually see where the musicians are seated."

"His objective with his recording was to try to capture the audiences' experience so that he could improve the sound system," says Starfinder Stanley, son of the late sound man and head of the Owsley Stanley Foundation. He describes his father as an "audiophile who was born in a low fidelity world," devoted to improving the sound systems and overall sonic experience of rock and roll. "He called his tapes his sonic journals," he recalls. "They were his working diary so that he could improve the sound."

The Foundation has begun restoring Stanley's tapes and releasing the music. "He had collected about 1,300 reels of 80 different artists in nearly every idiom you can imagine of music," says Hawk Semins, the executive producer of the series. From Miles Davis to Janis Joplin, Semins says these live recordings capture the 'magic' of the 60s and 70s Bay Area music scene. "It's just absolutely remarkable the mix that's reflected, the contacts that there were, the open-mindedness of the scene in terms of the various musical influences," he says. "You've got Ali Akbar Khan one night, and you've got Commander Cody another night, and you've got the Grateful Dead another night. And they were all listening to each other, and they were all playing with each other."

It was a time for expanding consciousness, and while Starfinder acknowledges his father's role in chemically altering the minds of that scene's participants, he insists the music was Owsley Stanley's real drug. Zakir Hussain says that idea is captured in the new album's title: Thousands of years ago, an ancient thinker named Bharata lived in India; he wrote many treatises, including the Natya Shastra, where raga originates. "It says, 'Rangati iti raga,' which means 'That which colors the mind is a raga.' And that ties into this recording, the title."

Starfinder says he hopes the recordings can introduce a new generation to a pivotal moment in American music history, when genres and cultures cross-pollinated in a spirit of openness and dialogue. He suggests that the album makes a great companion in the chaos of our current time, especially in moments where one needs to unplug and step back.

"Stop doom-scrolling through all the crazy stuff that's going on," he says. "Let this into your mind, and let it soothe that internal monologue. And this album in particular is great for that — you know, it just transports you."


Jimmy Sweeney's Daughter On Her Father's Influence On Elvis

NPR's Scott Simon speak with Eugenia Sweeney, the daughter of Jimmy Sweeney, who was an early unacknowledged influence on Elvis Presley. We also talk with music historian Christopher Kennedy.

After taking a two-year step back from the spotlight, Julien Baker returns with a self-produced album titled Little Oblivions.

The composer and pianist joined with drummer Tyshawn Sorey and bassist Linda May Han Oh in late 2019 to record Uneasy, which now functions as a welcome reminder.

Influenced by jazz, the Kingston-born vocalist revolutionized the art of occupying a space with his words. "Before U-Roy, no one was toasting," Grammy winner Sean Paul tells NPR.

On 'Time To Shine,' Black Violin Focuses On The Light

The duo, famed for enmeshing classical and hip-hop, looks back at America's past year and toward its near future on a new song, "Time to Shine."