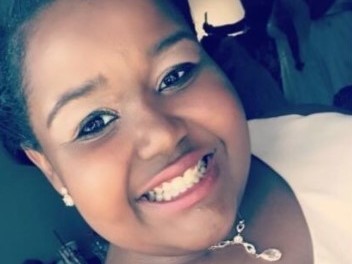 Demetria or "Demi" Bannister, of Columbia, S.C., died at the age of 28. // Courtesy of Rayechon McQueen


More than 500,000 people have died in the U.S. from COVID-19 since the pandemic hit this country and the world just over a year ago. NPR is remembering some of those who lost their lives by listening to the music they loved and hearing their stories. We're calling our tribute Songs Of Remembrance.

Demetria was a teacher in Columbia, S.C., for elementary school students. And she was 28 years old.

We seem to have a lot of family members that actually sing and play, like, instruments and stuff. So, we'll just be sitting down or just playing instrumentals and just singing together. And that started off at a very young age. I can't remember how old I was, and Demetria, of course, was always older than me, but she always was singing and I started because of her.

Sometimes, we'd be in the car together, just making a song while we were riding. And Demetria was such a playful and funny person. And that was just with anybody she was encountering — it didn't matter if she knew you or not. She was just gonna be playful — that was just her.

Something that I'm really gonna truly miss is just playing and singing with her. Just being behind her, watching her take over. And when I say take over, I mean take over. I mean, she was such a star. She was really such a star.

I chose "The Storm is Over" because a couple of years back, me and Demetria had went on Facebook Live and sung it together. And when we sung it, we sound so good. I guess it's the message, really. The song says, "No more cloudy days / They're all gone, gone away / I feel like I can make it / The storm is over now." And that was the part that she used to sing.

Even though what happened was sad, it was still beautiful how many lives she touched. And I will say that, if you had run into her, you definitely gonna remember her. She left her mark — without her even trying. I promise you that. —Rayechon McQueen, cousin

The co-founder of yMusic and Bon Iver collaborator performs a quarantine concert from Eau Claire, Wisc.

Recorded on a sunny spring day in her Los Angeles backyard, Demi Lovato sings "Tell Me You Love Me" and two songs from Dancing With The Devil...The Art Of Starting Over.

The Americana star performs a Tiny Desk from an empty Mercury Café in Denver.